The mask I wear is one

The other night I got a game in on VASSAL, which is great for getting to throw down random stuff vs new opponents and see what happens.

My opponent that night was Irish Malifaux player Mark Byrne, who's a great guy and I'm looking forward to facing him again.  I wanted to give Mei Feng a whirl. I've been meaning to try her out since I ordered her crew box at GenCon last year, and true to form she's not made it out of the 'to paint' crate in my study yet. I think mostly because the first edition flowchart put me off a bit.

Mark chose to play Brewmaster, who I'd only faced once before during a closed phase of the M2e beta so the game would be a new experience all round. The game was a lot of fun, including an epic 'wire fu' moment between Mei and a Moon Shinobi. Mark also discovered taking a defensive stance action on a Moon Shinobi is unwise.

Mark was a great opponent but I don't want to talk about the game itself. I want to talk about the spark I felt playing Mei. The little kick I get when part of a game clicks for me, and inspires me to delve into it. Most of the time I'm fairly calculating, focused on the game in front of me and vanquishing another opponent, now and again though it's great to get that new master feeling.

It was really great as well was feeling that spark again with M2e, knowing it's still there be had.  So I think at least in the short term I'll be messing about with the rail crew. I'll share my thoughts as I go. 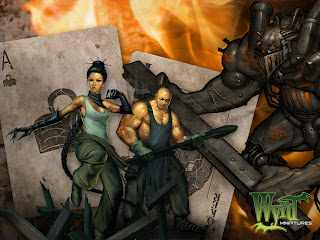 Typing this has also got me thinking about what inspires me to play, beyond the social aspect which is important.  I don't think I really enjoy winning in the sense of besting people,  there are plenty of places I could get that thrill, not least my mildly lucrative time playing poker. There's only so long you can rationalize away taking the food from people's mouths though.  I like to think I play for the analysis, the problem solving. I've always loved problem solving and I think I view the game as a problem to be solved.

I always thought it was unfair the way competitive players get demonized for caring about the results of a game. So long as you behave with dignity and respect who cares about your motivation?

So what makes you want to play wargames? What drives you to play?

That got a bit rambling there, more focus next time I think.

For those wondering about the title; here.
Posted by mythicFOX at 06:00

He had a game like that the other day, Rail Golem got hammered with the Brewmaster!!!

lol. Nice. I can't wait to see a whisky golem and ice golem meet in battle myself. :)