With the new edition due to his shelves properly by the end of the month and books reportedly already sighted for sale in the UK* now seemed like a good time for a quick hobby and event update.

This Sunday (29/9) will see the first full M2e tournament held in the UK, specifically at the North West Gaming Center where Element Games have their new store, which I'm looking forward to seeing even if it's going to be disastrous for my wallet.

As this will be a small event it should serve as a good warm up for the community ahead of the four main events which are lined up between now and the end of the year;

Each of these events looks to be heading for the twenty or thirty player mark, which is a great sign for how the new edition is landing in the UK.  It's really positive to see so many events going ahead and with big things in plan for next year the event calendar is already looking like it'll be full all the way upto GenCon 2014.

Personally I like to have goals in my hobby, and as I'll be attending all the above events I'm going to target a win or two podiums between now and the end of the year, which I feel is a realistic target given the number of events and the unknown meta.

The UK and the wider world are also gearing up for the start of the M2e VASSAL leagues in just under a week. With six leagues of ten players each this is going to be massive and should give some interesting early insight as to where the power is in the first wave. If you haven't played online Malifaux yet you need this in your life, it's a great way to meet new opponents and get extra practice in.

On the personal hobby front I've now got Kang completed (above), which means eighteen of my twenty Arcanists are in a painted condition, with only the Emberling and a Rail Worker still unpainted.  That said three of these were 'painted' when I started playing back in 2010 so they have a sonic cleaner full of Fairy Power Spray and a repaint in the their future. I'm aiming to have them all done some time before Halifaux.

TLDR there's going to be a lot of hobby for everyone between now and year end.

Welcome to Malifaux people, it's going to be one hell of a ride!


*Although some of this is rumoured to be the UK distributor (yet again) selling direct to the public before goods are out in retail stores.

Posted by mythicFOX at 07:00 No comments:

Had my iPad to hand as I finished my hobby session so I thought I'd share a quick snap of my study (read hobby cave) and WIP Mei Feng.

Now I need to get the thick of the paint off me before my brother drops round for some late night Halo4 and a trip to Wetherby to fill our Dad's front garden with 60th birthday baloons. :) 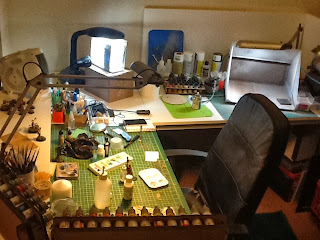 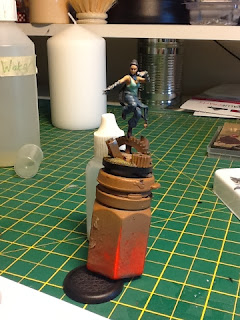 Posted by mythicFOX at 21:45 No comments:

Discard two cards (or stones) or die type abilities are always useful, especially on models with flurry. Opponents always need to be wary of them,


In my recent post, Twenty Arcanists, I talked about the twenty models I wanted to play Malifaux with to the end of the year. At the end of the article I asked players to send me their own lists. I've been thrilled with the responses and wanted to thank everyone who's sent me their thoughts. They've been great to read and have led to some interesting and valuable conversations. Keep them coming!

I've written this post as the first in what I hope will be a brief series looking at the models I've chosen for my list and why. I suppose the best place to start would be the masters I've chosen; Ramos, and Mei Feng, however true to form I'll be starting with what looks like the most random minion choice on the list; Molemen.

I'm surprised I've not seen more people raving about these little guys yet, they're rather amazing. I suspect some of this is down to very few people owning any, considering how poor they were in first edition. So for those of you who've never seen one before here are some I made earlier...


So what are they for? Well one of the first things I look at when I build a crew is where my VPs are going to come from. Almost regardless of the strategy and scheme pool you'll need some warm bodies to do your interacting and drop your scheme markers.

This weekend gone was the UKGT, that was in all likelihood the last significant Malifaux first edition tournament to be held in the UK, or possibly anywhere.  While I could talk in detail about what I learned about the game etc that would probably be pointless.  Instead I'm just going to give a quick overview of my weekend and a few other thoughts.

This years GT was being held at Tabletop Nation in Essex, a good two-hundred miles south of anywhere I call home. For me the weekend started at lunchtime the Friday before when I was picked up by team mates Craig 'ukrocky' Johnson and Ant 'Stryder' Hoult for the an early run down the A1 to beat the Friday traffic. 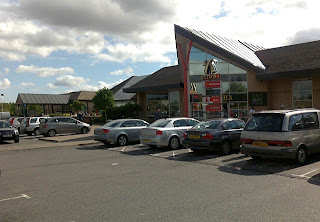 The early part of the journey south was a simple enough run, although passing about forty miles of stationary traffic heading north on the way was a sobering reminder of how badly this run could have gone. We were a distance into our journey when designated driver for the weekend voiced a desire to stop at Peterborough services, apparently it's amazing.  I remember thinking it had better be pretty amazing when we veered off and back onto the motorway for the third time looking for the damn place.

It was at this point Craig decided to drop the bombshell that this was the furthest he'd ever driven, with fewer than a quarter of the weekend's miles under our wheels. Several aborted stops later we extracted ourselves from the car at the promised land, rather glad we'd found it at last. I'll grudgingly admit that Peterborough services is about as good as a motorway services is going to get, and Craig's enthusiasm seemed somewhat sated by the giant burrito he consumed. 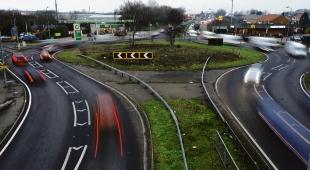 Back on the road the only remaining blip on the run to the venue was the Fortune of War something that was once a roundabout but is now a sort of chicane shaped monument in the middle of the A127.

I'm still not sure now if it's name or it's abject southern stupidity formed the overriding omen for the weekend, but an omen it certainly was.

We landed at Tabletop Nation in the early afternoon glad to be done with the drive and looking forward to seeing the venue. We weren't disappointed, TTN his HUGE, a massive warehouse full of gaming tables a well stocked store and a bar.

We were the first Malifaux players on site and lacking the drive to play any MX right away I picked up a copy of Pandemic, a game I've been meaning to grab for a while. 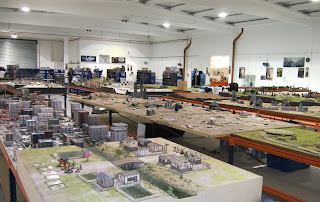 Some Zombie Dice and a couple of games of Pandemic later (it is such a good game), we were nicely chilled out and ready for the weekend.

At this point a family of Malifaux players; Cathy, Andy and son James popped their heads in to say hello, which was nice.

TO for the weekend Dave and his son Timmy arrived shortly afterwards and the eight of us went for dinner together.  This is one of the things I like most about the Malifaux community, everyone gets on. It's so easy to relax and chat to these people, even when you're getting funny looks in a gastropub for discussing the merits of giving your skeleton warriors spears and whether Kings of War is a real game or not.*

Much dinner ingested and having helped set up the tables for the event we headed out to find our hotel, this led to an incident;