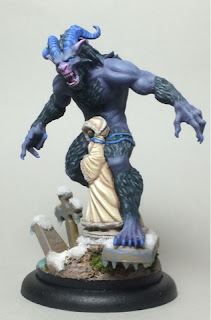 I had a great time at the Troubleshooters event; winning Best Painted, and finishing top as Arcanist in sixth place, out of twenty-four players. Not bad considering 'Tina really doesn't like small games and pools.

All my opponents were great fun to play, and I don't think I've ever laughed as much during a game as did in my final round against Karl.

The venue, Battlefield Hobbies, has only been open a few weeks and is already comfortably the best I've been to in England.  If you get a chance to attend and event there I'd highly recommend it.

On the table the only game I lost was fairly unfavorable to begin with; Pandora in Turf War, with terrain, schemes, and corner deployment basically funneling my whole crew into her auras and pulses. That being said I did make a few errors and my opponent, newcomer Marcus, played very well. He's actually one of the most promising new players I've played in a long time.

Officially though I'm blaming that loss on some fiend stealing my tea before the round and replacing it with coffee, bleh. In other words I was basically poisoned.

Pool wise; The Soulstone Miner and a couple of upgrades probably should be replaced with two mole-men in future otherwise I'm fairly happy with it.

One key piece of feedback I did got on my pool ahead of the event was on the lack of December Acolytes. So I thought I'd address that quickly;

The Acolyte is a great model, significantly ahead of the power curve at it's cost.  The issue I had including it in my pool was firstly that Raspy is enough shooting for a 45ss list, adding much more is almost certainly too much. Secondly 7ss was a difficult amount to fit around the other models I wanted in the list.  Finally in all the situations where I felt I'd want the Acolyte for advanced deployment the Soulstone Miner does the same job for 1ss less.

Note here that I'm only talking about this list/pool.  Acolytes are generally speaking great. My point is this; it's not enough to be great, you must also fit into and serve a purpose in the pool/crew to make the cut. Cassandra is great, but she didn't make it into the list either.

I also wanted to say thanks to the several people came up to me at the event to tell me they enjoyed this blog, and my recent appearance on the Schemes and Stones podcast. Which was really nice of them.  It's great to know some of the things I give my time to the community for are appreciated.


I'll be back soon with some actual content, for now though I'll see y'all breach side.