I'm not really sure why no one has held a Malifaux tournament in Halifax before, the names are so similar it's practically halfway through the breach already.  So this Sunday that sorry state of affairs was rectified by local henchman Mike3838, who ran; Halifaux.

After three rounds of fun play Joel Henry bested the other twenty-one of us and added another win to his record.  I played like a noob most of the day and came in fifth, which I'm comfortable with. I learned a lot and have tons more to mull over between now and my next event in two weeks time.

As I talked about in my previous post in most events you need to win big. This was the case on the day. I ended the event 2-1 and on a +7VPD. The size of my VPD put me top of the six players on 6TP, hence I finish 5th and not 10th. This sort of difference matters in the rankings points marathon the top UK players are running in.

Spurred on by something in my second round at Halifaux I want to talk about ending rounds and timing in competitive play.

I lost my second round match when the final activation was called. One more activation and I could have walked a Steam Arachnid once and won the game instead of losing it, no flips required. Now fair enough I; chose the wrong schemes, deployed badly, played badly, black jokered a critical flip, placed my summoned models incorrectly, and played badly. Never mind all of that, the round ending one activation early definitely cost me the game.* 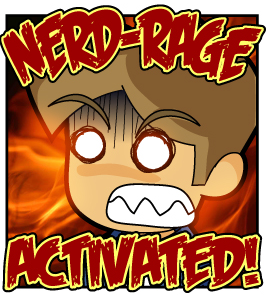 This travesty aside it did get me thinking about event timing and when and how to end a round. Before I start I want to be clear that I'm not criticizing any tournament organizers here, there is no right answer, someone will always win or lose by whatever margin you allow. I just want to talk options and general approach.

I've seen many players complain, and even get angry about exactly when a game ends. Another turn more or less and I would have won, another activation... Thanks to variable game length this even happens when there is no time limit, the dreaded 10+ for a turn six.

In tournaments however there is a time limit, for practical reasons if nothing else.

So how to handle drawing games to a close?  I have a few thoughts;

Clear Timings  -  Our perception of time changes depending on what we're doing, this is very true in tournament situations.  TOs need to be very clear with their players about how long remains in the round. Warnings after a quarter, half, and three quarters time elapsed are really important, but often overlooked.  There should also be warnings as players approach any deadlines.

Full Turns - Generally it's better to play a complete turn than a part turn. It leaves players feeling less hard done by than if the game ends between crucial activations.  It isn't always practical to let players play a complete final turn though. I remember having a venue packed up around me and Craig at a doubles event once. It think what's key here is calling final turn with long enough for players to play a full final turn, probably around the twenty minutes remaining mark. This will minimize the need to have games end between activations. 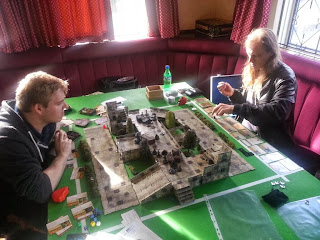 Player Honesty - In my experience players will often try and sneak in an extra turn after last turn has been called, or continue playing after last activation is called to try and complete the turn. Whatever the rule is I think it should be respected by the players and enforced by the TO. As someone always loses out. 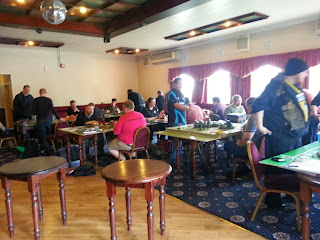 Practice - Players should play more timed games at their local clubs, even if only intermittently. Just so they can get the hang of how long they'll have, and how to think quickly. This will help the avoid falling down due to time limits.

Penalties - It is up to players to get through their games in the time limit allocated to them.  It's worth considering applying an automatic penalty to players who haven't completed their last turn (be that turn one or turn six) and handed in their score by the end of the time limit. That way players are actively encouraged not to start turns they cannot finish, and to get through their turns.

Now this last option should only be applied once the other four are in place, or at least the first two.

So those are my musings on calling time at events. As always I'm keen to hear thoughts from people; here, by PM on the Wyrd boards or on Twitter.

I also wanted to say well done to Adam Boyes for winning the painting on the day with his amazing crew. Adam is truly a miniature painting artist. Check out the gallery of his work here; miniature-painting-tuition.co.uk.


*To be clear, yes I'm joking, I deserved to lose the game the timing had little to do with it.
Photos in this post were looted from Mike3838's twitter feed.
Posted by mythicFOX at 06:30

I'm a huge proponent of warnings and at final warning that no new turns may begin. This allows the game to end at a true end of turn. A also a critical factor is learning to play quickly that only comes with practice. I have considered running an event with chess clocks but haven't tried it yet..