I had a weekend off Malifaux events this weekend and through family commitments didn't get any hobby time in. So it's back to musings around models and play.  I've been thinking a bit this week about set plays so I thought I'd ramble on about those for a few paragraphs.

If I had a £1 for every time I've seen the variations on the Ramos opening play explained over the last few weeks I'd be able to buy a new crew. For the record the play is;
This is the most soulstone and AP efficient way to get scrap on the table to summon spiders with in the first turn with a Ramos crew. No AP or activations wasted, minimal crew involvement necessary. There are more involved variations that net you more scrap.

Recently I saw an interesting counter to this play from Jon Mickleburgh;  before Ramos reached step four he had a Void Wretch bury Taelor (or another threat). That way if Ramos executed step four he effectively drops an unactivated combat monster on top of his head.

These plays aren't uncommon in Malifaux. A lot of models have simple combinations with others to  provide a powerful synergy or neat trick.  One thing that's important though is never to stop experimenting and asking yourself; is the set play the right play now?  Clearly in the above counter makes completing the Ramos set play a mistake, or at very least not an automatic call.

I can't tell you how many VPs I've seen players lose by completing a set play that was demonstrably the wrong thing to do in the situation, just through habit and inertia.  So next time you reach for your favorite set play think, what else can I do?

You may surprise yourself, or at the very least not get welcomed to Malifaux with a big hammer. 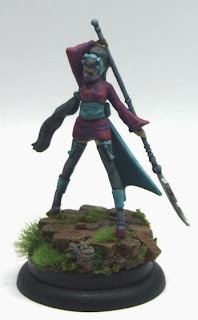 This is also where practice and experimentation come in. Try all the upgrades for your master, don't take the same crew every game. Especially when you're playing friendly games. It's easy to get trapped into the mentality that you want to keep playing the same crew just because it works, but it's always good to explore. You never know what you'll find.

In this vein I've lined up some new models to try out in my Arcanist lists over the coming weeks. Including a mercenary I'm very interested to try.

That's it for the main body of the post. I just wanted to drop in a quick plug for an event I'm running; the UK Team GT, on the 5th and 6th of April 2014 in Stockport. This promises to be a fun event for teams of three (or trios I press gang together) and something a bit different to the normal singles events. Hope to see you there. Meanwhile happy hunting!

I'm extremely new at Malifaux so I don't have much in the way of real experience, but just from reading the boards and forums and such it seems to me that many people sort of have pre-picked crews in their mind that they know/intend to use prior to starting the game, when it seems to me that the Pool of Schemes and such should be a bigger driver of crew selection/upgrades. Not every crew will be equally suited to the tasks at hand, no?


Yes. In fact this might make a good topic for an upcoming post. I think it's about the balance between using models you're proficient with vs models that are optimal for the objective.

For each master I tend to find there is a solid core of models I'll take every more of less every time and then change the rest of the crew based on the objectives and my opponent.

Use your welcome bonus to build your bankroll, take more spins and acquire more possibilities to be a winner. Slots even have specific bonuses such as free spins, which allow you to|which let you} play quantity of} rounds without spending your own money. Look out also for no deposit bonuses, as these imply enjoying in} free of 소울카지노 charge to win real money with none deposit. Read through the wagering necessities of all bonuses prior to signing up.