I was at my local club the other night chatting with an old high-school buddy of mine. He's more of a role player than a wargamer, but back in the day (almost twenty years ago) he introduced me to the hobby. We were chatting about gaming and he was looking for a skirmish game to play between RPG sessions.

Naturally my henchman instinct kicked in and we began talking Malifaux. We were talking about the low model count and how easy it is to get enough models together to start playing full size games, and then how the game expands from there when something struck me;

I don't just mean they're both made out of plastic, although that's true. What I'm talking about is the way you collect Malifaux is a lot like how you collect Lego.

You start out by buying a kit which comes with all the bricks you need to build a complete helicopter, or whatever. You can then play with the helicopter all you want. Few kids however stop there, sooner or later they buy a kit that makes a car. Then they start mixing the parts from those kits together to make a heli-car and the whole thing spirals from there.

Malifaux is sort of the same. You buy a McMourning crew. You find Canine Remains work well in there so you buy those, then you add a Rogue necromancy to the list. You discover those are beasts and before you know it you're also collecting a Marcus crew.

This is without a doubt one of the key charms of Malifaux for me. It lets you get into the game cheap, this is nowhere near as expensive to get into as most other games. The constant avenues for expansion however mean there's no end to the collection potential. You never run out of places to expand to.

This is also good commercially for Wyrd, keeping players expanding their collections is a good source of revenue and the overlap of models between masters and factions means they don't need to have as many lines in the range. 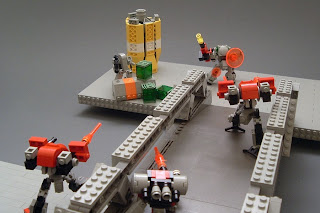 One of the the clever things about M2e is the way an existing master from each faction has moved to moonlight in another faction. This opens up new models to existing players without broadening the range further. Which again allows Wyrd to generate sales to existing customers while moving the range over to plastic and hopefully encouraging more new players into the game.

So in summary, Malifaux is a very modular system you can get into cheaply and expand at your own pace.

Not really sure what the point of this post was but there you go.

Oh and these lovely Lego mechs are from a game called Mobile Frame Zero: Rapid Attack, which I've never played but looks pretty sweet.
Posted by mythicFOX at 19:25