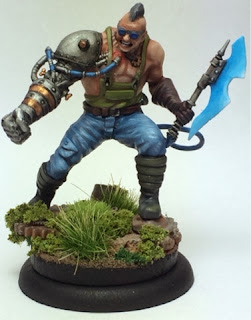 So the 2013 season is over and the community is looking forward to the year ahead. I'm grabbing some much needed hobby time before we kick in again with Masters in late January.  I've finally finished re-painting my twenty Arcanists, with the new plastic Joss replacing the old one.


The new Arcanist plastics look great and many of the models are great improvements on their old metal counterparts. I must say the huge new beasts in the Marcus box have convinced me to paint that crew next rather than the ‘Tina crew I had planned. I’m gripped by the call of the wild.
Following some recent questions I've had from new players I thought I'd use those post to give a quick explanation of how the wider UK Tournament system works and is scored.

Events themselves are scored following Gaining Grounds. Firstly players score three tournament points (TP) for each game they win, one TP for each draw and nothing for a loss.  So a player with two wins a draw and a loss scores (3+3+1+0) 7TP.

Where players are tied on TP they are ranked by victory point difference (VPD), this is the difference between the victory points they scored and those scored against them.  So if a players results were; 10-5, 10-5, 4-4, 4-8 they would score (5+5+0-4) +6VPD.  In the event of further ties players are then ranked by total victory points (VP) scored during the event, so in the above example; (10+10+4+4) 28VP.  This gives us the final standings for the event.  Some events deviate from this system but that’s fairly rare. 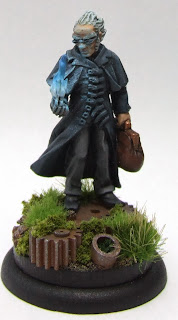 The results of the event are then fed into the national rankings system.  Players need to sign up to Rankings HQ in order to have their results displayed in the rankings tables.  Each event is worth up to one-hundred rankings points to a player, based on how they finished and how many players attended the event.

The player who wins the event scores the maximum and every player below her scores a reduced proportion of this.  So in a twenty player event first place would score one-hundred rankings points, second would score ninety-five, third would score ninety and so on down to twentieth place who would score five points.

Players are then ranked based on their three best scores in a rolling twelve month period. Making the best possible score thee-hundred points, although in the years the rankings have been running only two players have ever achieved this. 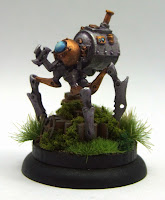 Once a year an invitational event, known as the Masters is held. The winner of the previous Masters event is invited along with the fifteen highest ranked players who are able to attend.  The winner of this is crowned Malifaux Master for the year. I’ve attended several Masters and contrary to what you would expect I’ve found them to be some of the most relaxed events I’ve ever played.
This year's Masters is accompanied by an open event anyone can enter. At the time of writing there are fifteen players signed up for the event, so it promises to be a fun one if you're looking to start your gaming year with a bang.

So that's how the UK system works for those interested. I hope Santa brought you what you wanted and I wish you all a happy new year.