I've had a hectic month of work and running the Team GT have limited progress on my own crews.  Likewise my #ToMB slow grow efforts have been well, slow. I did get a couple of games in using that month's purchases; Malifaux Child and The Captain.

The former has proved very useful and is now a default choice. At this point I'm thinking that The Captain looks better on paper than he actually is, more testing will tell.

I did manage to finally finish painting Kaeris, and I'm quite pleased with the result. Switching out the basic wings for some larger resin ones coupled with an elevated basing position really give the model more impact, she now stands at almost 10cm table to wing-tip.


With my newly finished master in case I headed to a small one day event at Games of War in Seaham. The event was a ton of fun, everyone was a great laugh. I managed to take first place on TP, and scored best painted to boot. A very positive result for what I was planning to simply treat as a test run for Kaeris.

I want to make this post the beginnings of my thoughts on how to play Kaeris. I'm far from having all the answers yet but I'm at the stage where I feel I have something to contribute with her.  I'm finding the M&SU's mechanical angel much more subtle than the flame-thrower wielding menace I'd presumed. She seems to be a skirmisher, at her best on the edge of the action. Swooping in to take out lone enemy and then darting back into cover. 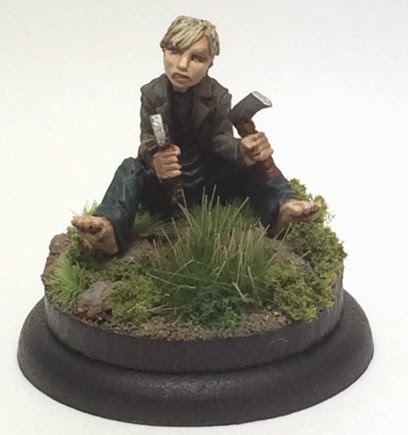 This is partly because her defenses are somewhat weak for an Arcanist, her common resist stats are both sixes and other than Armor 1 there's nothing between the enemy and her twelve wounds.  This means being careful with her placement, subject to the ministrations of  major damage dealers Kaeris will fold fast.

Fortunately speed isn't a problem. Flight combined with Wk6 gives her impressive speed over the board. The Grab and Drop upgrade also gives her the potential to move another eight inches with an enemy in tow.  Using this positioning power is going to be key to getting the most out of her.

This has led me to a general core which is;

This gives a 38ss block gives me solid options to build up forty-five and fifty stone crews. I'll run through this core quickly below. I'm going to skip over Kaeris' upgrades as there's an article worth of materiel on those alone.

The Malifaux Child is the cheapest way to hand out burning to your own stuff. I can ping two models with Flaming Halo by throwing any tome to trigger 'Turn it Up'. This then lets Kaeris activate and draw cards via 'Truth In Flame' or lets the models take advantage of the burning, depending on her upgrade selection.  At a pinch it can also cast Immolate or Accelerant from Kaeris' card and has a mediocre healing spell of its own. 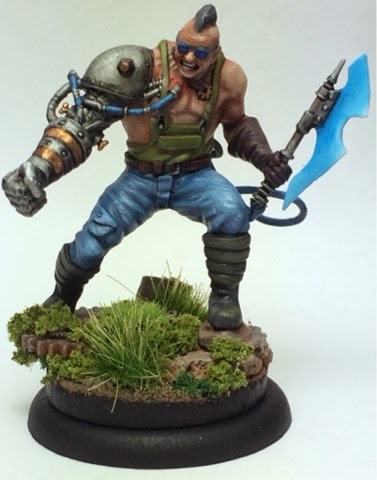 Joss makes it into my core as Kaeris' skirmishing nature means she will frequently need a solid combat blocker to hold the centre and prevent your crew being shattered by combat monsters. The customer facing roll of getting charged by Hungering Darkness and Rogue Necromancies is a thankless task, but someone has to do it.

There's been a lot of recent debate about the Mechanical Rider, I'm finding it potent but not overwhelming at the moment, that being said it offers a solid range of support and objective running options and so mostly makes the cut.  I swap her out for Miss Step (Howard) when I need a much more aggressive choice.

Finally the Soulstone Miner adds some additional objective running capacity. I've a separate article planned for this one in the not too distant future so I'll not dwell on this hear.

Those are my initial thoughts on Kaeris and crew options. There's plenty I haven't tried yet and I'll add more thoughts as I go.
Posted by mythicFOX at 06:30

You forgot to mention it is great fun to play against :)


Howdy! I know this is kind of off-topic however I had to ask. Does building a well-established blog like yours require a large amount of work? I'm completely new to running a blog but I do write in my journal on a daily basis. I'd like to start a blog so I can easily share my experience and feelings online. Please let me know if you have any ideas or tips for new aspiring bloggers. Appreciate it! apple itunes login

Once you’ve chosen your most well-liked recreation and set clear limits on the amount you stand to win or lose, you’ll ready to|be succesful of|have the power to} come up with a strategy that maximizes your possibilities of coming out ahead. The current research examined the mechanisms of initiating online gambling among young adults. Of particular interest was 1xbet whether or not social casino gaming was famous as a part of} young adults’ experience with online ... Over the previous two years, over 245 clinicians have been trained to provide gambling disorder therapy providers in Illinois. This year, SUPR will provide month-to-month webinars centered on gambling disorder, a two-day Summit on Problem Gambling, properly as|in addition to} provide new opportunities for participation in the 30-hour Gambling Counselor Training.