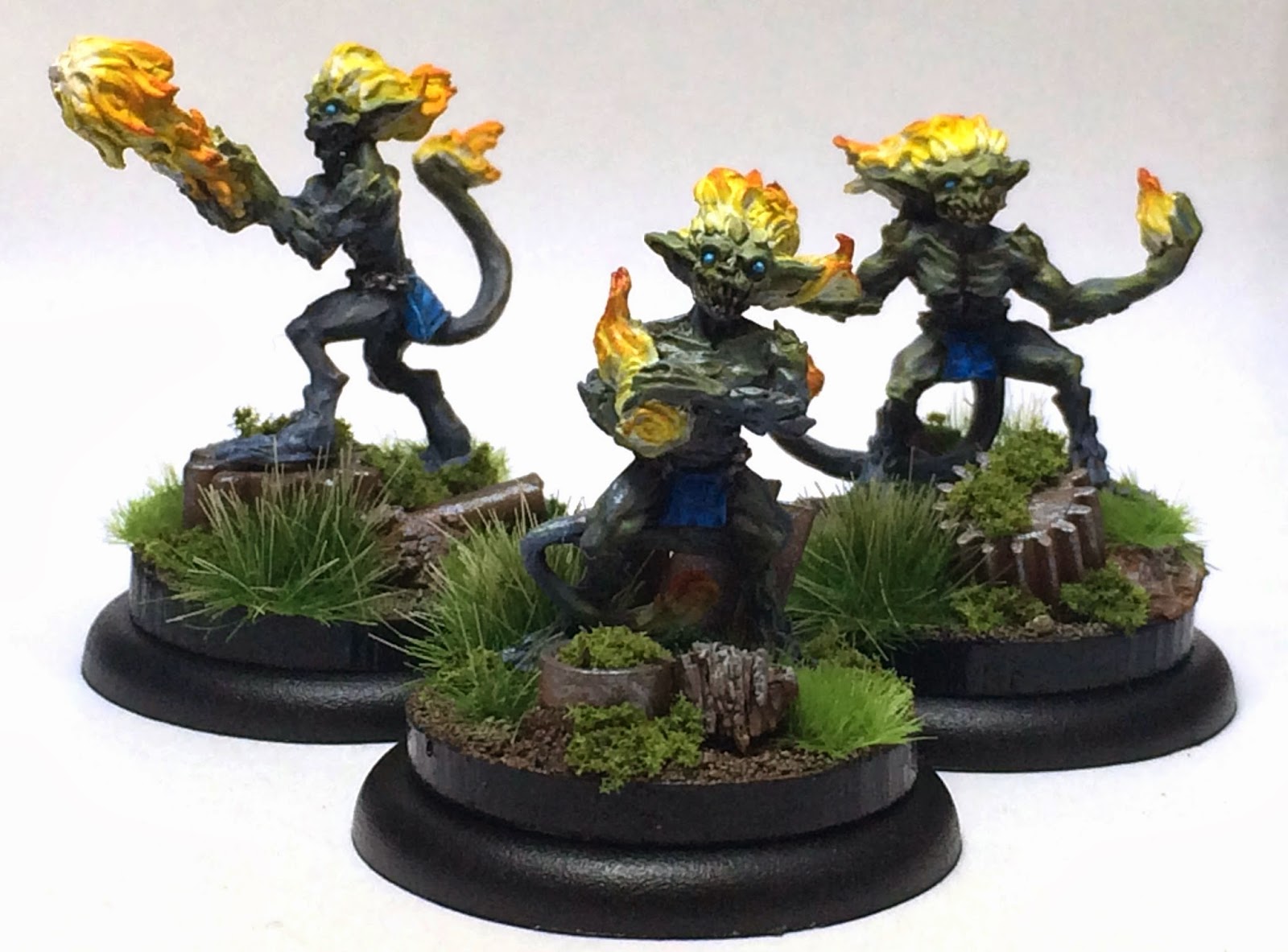 Tale of Malifaux bloggers is moving into it's second month so it's about time for me to pen some Kaeris thoughts.

I played two games with her early in the month and was a little underwhelmed initially. So much so I had a brief hobby wobble and considered switching to Rasputina.

Having played my third game with the crew over the weekend things have started to gel a bit more for me and I'm back on track.

Kaeris is certainly a very fun master. Having played a lot of Ramos in M2e, and Collette / Zoraida in M1.5 I'm not used to actually attacking things with my master.  I could take to this getting stuck in lark. For this I want to run quickly through some thoughts on the minions in the crew;

The backbone of any crew are it's cheap significant minions*, the 4ss Fire Gamin are Kaeris' default choice. Their key benefits are their mobility (Wk5 / Cg7) and their attacks handing out burning. This is particularly useful on their Sh5 ranged attack, which with weak damage two and a point of burning is handing out a good deal of damage for such a small model.

They pay for that with defensive stats which are a pile of fours making them fairly squishy, even with armor one.

I like a bit of Gun-Fu, so want to like Gunsmiths. I really do. I'm not quite sold on them though. In theory they're damage dealers but for all their toolbox of tricks they have no way of getting above weak damage two.

It almost feels like they're tripping over their defensive trigger which gives them fast, forcing some of the rest of their options to be toned down.  One thing I do think they'll do well is Vendetta, they have a lot of good options to 'finish' enemy models, which is what you want for that scheme.

I need a few more games with them but right now they feel like a solid 6ss model, which would be fine if they didn't cost 7ss. That said all seven stone minions tend to be in an awkward place power wise anyway, they aren't cheap and lack the power of henchmen and enforcers.

Ultimately I don't see ever using two of them in a crew once I have more options, but one may be viable.

I'm not going to cover Kaeris or the Soulstone Miner in this post as I want to cover them in more detail in their own posts later.

I carried $5 over from month one, added to the $25 available in months two this gives me $30 to spend.  I'm not really sure what I want to add to the crew, the captain is fairly high on my list. I'll need to find suitable conversion parts for him though. I'm also tempted to convert up an Eternal Flame. I have one eye on adding a Mechanical Rider in month three, which would necessitate having $5 left over.

I'll post my final choices as I make them.

*In the 1.5 sense, read; None Peon, non-Insignificant models.
Posted by mythicFOX at 06:30

I am very much looking forward to reading your thoughts on Kaeris. In particular I would be very interested in your views on how to use her and her actions and abilities most effectively.