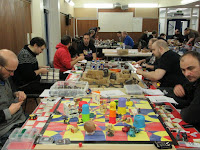 The 2016 season has kicked off in earnest now, and I'm back from a couple of great tournament weekends. The Masters invitational weekend was fantastic fun. I was eliminated by the eventual winner on day one but bounced back to win the twenty-three player open tournament on day two.

I also took fifth at the thirty-four player tournament held at the Vapnartak show in York. Both of these results carry relevant scores from a Masters 2016 qualification point of view. So overall I'm pleased with my start to the year.

As I'm a couple of events into using the new 2016 schemes now I want to use this post to talk about the way we approach them as a community.

If you want to hear what I think of the specific schemes themselves and the wider GG16 document then I'm on the recent Schemes and Stones podcast to talking about that.  In summary though I think they're an overwhelmingly positive thing for the game.

I think there's a point to be made beyond the specifics of the schemes themselves though.  It's clear reading through the new schemes how these are fixed and improved versions of the ones in the main rule book.  It's important to note the distinction here.  In 2015 we got five new strategies to be used along side and as alternatives to the existing strategies.  In my view the new schemes we've just received for 2016 are a lot closer to an errata for the existing scheme pool and should wholly replace it in almost all forms of play going forward.

<cue screaming from some players>

The problems of the old scheme pool were fairly evident,  Protect Territory and a number of other schemes were auto picks, and a number of others were never takes. So while there were technically a high number of combinations of schemes, in practice most scheme pools presented relatively few real choices.  Players were really required to play the same small selection of schemes by rote.

A good number of games and a couple of events in I'm comfortable saying the 2016 schemes produces far more pools with multiple genuine choices making for more interesting games.

It also nudges crew selection in a way that slightly rebalances the meta; summoners take a hit, as do models which are technically un-killable. There schemes focus the game closer to your deployment zone, making speed less of a factor.  All positive things in my opinion.

It's also important that the meta game (I.E. which choices are good) is shaken up from time to time.  Without new challenges and problems to solve games become dull and players drift away.  It's important we get the meta shaken up regularly. Changing the objectives round frequently achieves this.

Does this mean if we've been using a crutch for a long time we may need to find a different one? Yes.

Does this mean we'll need to pick up some new toys if we want to stay at the cutting edge of competitive play? Sure, though frankly most of us don't need much of an excuse.

That's all I really wanted to say on the subject, I'm sure others will disagree with me.

Finally I'd like to congratulate Graham 'Blu-Tac' Bursnell on winning the title of UK Master 2015.  He's a great person and a fantastic player. Very well done mate.

First and last photos in this post taken by David Brown and posted to Facebook.
Posted by mythicFOX at 07:30