I've had a bit of a flurry of hobby activity in the last week or so and thought I'd post a quick round up.

Firstly I had the pleasure of playing at the Elementary tournament last weekend. Long time Malifaux player, and Guybrush Threepwood impersonator, Aidan Kirk did an admirable job of TO'ing the 26 player event and acting as spare player at the same time.

The event ended with me on two wins and a draw and finishing 4th, one VP diff behind great opponent Connor Barker, who I drew my second round against. This was a reasonable result for me, and while it changes almost nothing from a rankings standpoint it was valuable practice.

I should make an honourable mention of my first round opponent. He had the misfortune of playing his first ever tournament game against me, and doubly unfortunately he was using Ramos. This didn't go well for him, I hope the experience didn't put him off tournament play.

I'm feeling a lot less rusty that I did at the GT, and while my play is far from perfect I'm certainly on the road to being sharp again.

Last post I talked about the dilemma I was having about what I want to do next crew wise. Having flip flopped almost daily between; Marcus, Tina, and Colette I'm still unsure. I've had practice games with both Marcus and Colette and both are a lot of fun.


I've spent a little hobby time recently painting a trio of Mechanical Doves. I tried out a new technique with these, I'll talk about it in more detail in a later post, once I've experimented with it some more. Meanwhile see if you can spot the new element it involves; 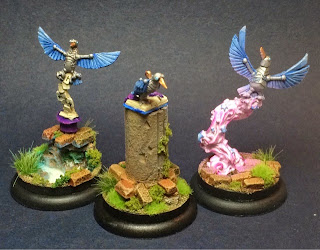 Painting these Doves does mean I can effectively play a painted Colette crew right now. Although there are a few models I'd want to add to the crew before I went competitive with it. I'd also want to paint a new version of Colette herself before too very long, the one I have right now was a practice piece and I'm not a huge fan of the sculpt (Avatar Colette with the rabbit). 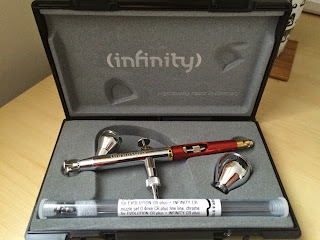 Finally I treated myself to a new toy, a Harder and Steenbeck Infinity CRplus airbrush to complement my ageing H&S Ultra.  A new airbrush is never a cheap investment, especially one as advanced as the Infinity, but I should get some good use out of it over the coming years.

There are some new techniques I want to try with her and early experiments have proven very promising.

I've another event up north in scenic Scotland this coming weekend, which will close out the UK Malifaux season nicely.
Posted by mythicFOX at 07:00