Somewhat at the last minute I'll be scratching my tournament itch by attending the Troubleshooters event in Daventry next weekend.  The event is unusual as we will be playing 45ss games with a fixed master, hiring from a pool of 70ss.

I thought I'd write up a quick post to go through the pool of models I've selected to join her, and how I went about choosing these. Hopefully this will be useful playing in pool events.

First thing to get right are the rules. Most sets of rules for model pools are slightly different, so understanding how you need to build your pool is the first step to building it.  The rules for this event are as follows;

This makes any summoning, especially flexible summoning good.  Smaller games also favor summoners, so at this point I should change my mind and play Ramos, but I'm sticking to the plan.

It's also worth noting we have no info on Strategies and Schemes ahead of the event.

Given this is a fixed master event, and the pool size is lower than two complete crews we know that some models will probably wind up in every crew I play during the event. Most masters work with a fairly standard core of a crew and upgrades they'll normally take almost regardless of the objectives. So I'm going to start my pool by blocking that core out (blue in the list below)


As it's very easy to fill out a pool list full of great models, then find you can't combine them to make good crews my next step is to write a single generic 45ss list. This gives me a core I'd be happy playing in some, but not all situations; 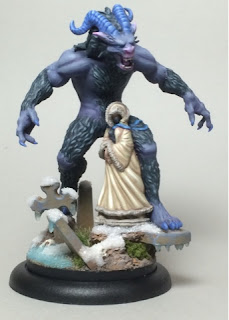 This core crew gives me seven activations, all of which score objectives. It has good damage output from Snow Storm and Tina.  Myranda gives me flexibility, able to take more hitting power from the Cerberus or objective running from the Blessed, even some area control tricks from Cojo.  Silent One and Arcane Effigy provide good support bodies into the mix with healing and condition removal, plus bonus damage.

Step Three: Filling in the cracks

Now the difficult part, What else to take?  I start here by looking at my core list and what it will be bad at, then adding models to cover it's weaknesses.

Right now the list is fairly good for anything which requires kills or central area control; Reckoning, Collect the Bounty, Turf War, Extraction, and Guard the Stash.  I can probably play this list in 5/10 strategies. 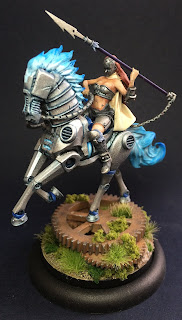 It will suffer in body count objectives like Recon and Interference. Enter everyone's favourite above the power curve horse; Mechanical Rider.

When adding a model to the pool it's important to understand what the list you'll hire it in looks like. Otherwise it'll be an issue trying to add it into the crew when you want to use it.

The rider can swap in for Snow Storm, or if model count is less important; Effigy and Myranda. She should boost my chances in Recon / Interference and Stake a Claim.

I'm still leaning heavily on Myranda to run any back field objectives, or to hunt models my opponent needs to hide. The Myrand-erberus is good but not fool proof.

At this point I was tempted to add Cassandra in, but she can only really swap for Myranda, so I don't gain anything.  Also she doubles up with the rider in too many situations, so she'll have to stay in the case.

So next into the pool will be the Soulstone Miner.  This highly underrated guy can swap in for the Silent One, or the Arcane Effigy and Reservoir. Doing so he'll also add a bit more of a boost to Stake a Claim and can help with things like Break Through, Power Ritual, and Plant Evidence as needed.

I'm still a bit weak in the interact strategies, so I think a Performer is worthwhile here. She also allows for scheme marker removal, and can help push my guys out of bad places. She can come into the list replacing either Silent One, or the Effigy and one of the copies of Imbued Energies.

This leaves me with five stones left in my pool.  This last section is probably the hardest part of the list.  I could drop in a Rail Worker for more punch, but that's probably overkill.  There's no 4ss minion I'd hire over one of the ones I'm already carrying. Theoretically I could put in a Raptor, but without access to Practised Production it's stock drops significantly, and I don't think it'll help me much more than losing a scoring model will hurt in Interference.

On balance I can see a weakness in Snow Storm being over vulnerable to things like Lure and in games where Murder Protege is a factor. So I think adding a copy of both Warding Runes and Imbued Protection to the mix may help during the right game.  That leaves me with 2ss so I can also throw in a couple of other upgrades I probably wont use.  Child of December could theoretically help in assassinate, and Sub Zero could have it's uses.

This last five stones is so flexible I'll probably chop and change it a bit before the event. Otherwise though I think I'm all set.  A lot will depend on how objectives and opponents line up on the day. So wish me luck I'll leave you with my completed pool, and a team photo; 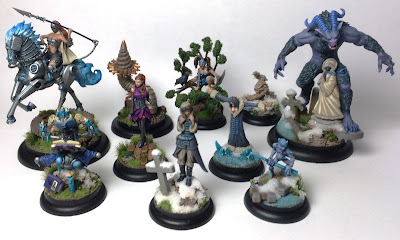 Great read. Really useful to follow your thought process when list building. Now I really want to go to a pooled event again...

Now these were just the bare minimum required properties to make an application pool. We could have specified additional properties such as parameters and start folders. on ground pools